In 1987 and 1988 a large amount of medical waste and sewage trash washed on the New Jersey beaches in Monmouth and Ocean Counties, covering an area of 50 miles. The
medical waste included mostly syringes and therefore the event became known as the Syringe Tide. 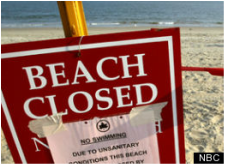 Picture from NBC
The medical waste and sewage trash that washed on New Jersey beaches covered an area of 50 miles along the shore. In order to clean the mess that was made, state officials had to close the beaches, thus driving away hundreds of thousands of tourists. The drastic lost of tourism cost New Jersey approximately $1 billion (Rangel,1988). The cause of the problem was traced to Fresh Kills Landfill located in Staten Island, New York. Fresh Kills Landfill was the city's principle landfill and the place where 90% of the New York's garbage was disposed ("Fresh Kills", n.d).  However, instead of properly disposing the medical waste, the workers at Fresh Kill Landfill piled up syringes, bandages, and other various medical supplies, along with raw garbage to send out to the sea to sink.

The ocean currents pushed the waste South, and eventually brought the syringes, band aids, needles, and other medical and city waste to the Jersey Shore. Due to the city's irresponsible action, the State of New York was forced to pay the one million dollars in cleaning and pollution costs.

The Syringe Tide caused a massive concern not only due to the area polluted by the waste, but also because almost ninety percent of the syringes were found to be HIV positive (Franolich, 1988). During 1987 drug abuse, especially the use of heroin, was starting to make the newspaper headlines in the United States. The sharing of needles gave rise to the spreading of AIDS and HIV and people were afraid that the needles and syringes that were washed on the shores will create even greater health threats to the United States. In response to the concerns, state and federal agencies adopted the Short Term Floatables Action Plan to clean the New Jersey beaches and to increase the tourism in a fast and responsible manner. Later more new laws, such as the Medical Waste Tracking Act" were adopted to clearly define medical waste and to set up boundaries to control the disposal of the medical waste.